Hi all – to make up for my recent lack of posts here is a REALLY LONG one covering my visit to Manning Valley cheeseries.

Last week I popped up to Coffs Harbour for a couple of days to help a friend open her new gourmet deli (I believe the first of its kind in Coffs). If you are heading up that way check it out – Pansabella Providores on cnr of Park Ave and Little St opposite Woolworths.

On my way back to Sydney town I took a few days to visit some local cheese-makers. First off, a quick stop by Comboyne Culture. I have never tasted their cheeses before, although some of my customers have mentioned them cheese to me. Ron the cheese-maker took a bit of time out of his day to take me through his cheeses and give me a quick tasting. He makes 4 soft cheeses and one hard blue which was quite interesting – Thone River Blue (I bought some and will let you know all about it in a future post when I crack it open – plus more on Ron and his cheeses). In the meantime, their website is www.comboyneculture.com if you are interested.

Then it was off to Marrook Farm, where I was going to make cheese, milk cows and stay overnight to remind myself about what incredibly hard work it is to be a farmhouse cheese maker. David and Heidi (yes, she is Swiss) run Marrook Farm – an organic and bio-dynamic farm with about 50 Ayrshire cattle. It’s what I call the ‘quadruple whammy’ even though David and Heidi wouldn’t have it any other way:
1. Cheese making = hard work in itself
2. Farming = exceptionally hard work
3. Organic = extra layer of complexity (or simplicity I guess, depending on how you look at it)
4. Bio-dynamic = see notes for 3.

David and Heidi make amazingly delicious yogurt and 2 swiss-style cheeses – a Tilsit called ‘Brinawa’ and a gruyere style called ‘Bulga’ – both named after local regions. David had kindly invited me to stay with them on the farm overnight.

I arrived about 11 am to find David in the make room finishing pasteurisation in preparation for a small batch of Brinawa. He would normally start a bit earlier, but the recent heavy rains had washed out the road between the dairy and the cheese factory, so he had to repair that before he could transport the milk across.

As he tested the milk and added cultures and rennet, David explained he had recently taken a bit of a break from cheese-making as he had found it difficult to secure wholesale customers for his cheese. Buoyed by some non-confirmed orders, he had made a lot of cheeses, then got stuck with them when the orders fell through. I could tell he was a bit pissed off, and understandably so - when you run a farm, you have to milk the cows every day and then find ways to sell this milk. The last thing you want is big cheeses sitting around, slowing becoming over-ripe. Even thought I don’t work for the shop in question, I felt partially responsible seeing as I was the only cheese retailer in the room…

When the cheese sales fell through, he and Heidi focussed their efforts on their successful yogurt business. But he is back in the ‘cheese-saddle’ now because he loves to make cheese – but he is just making small batches at the moment (cautiously).

As the curd was washed and stirred, David took out a little bit for a cheese experiment – a small, smear ripened cheese with caraway seeds. I tasted one of the previous experimental batches, and even though David wasn’t happy with it, I thought it was damn delicious – reckon it has serious potential.


The curd was put into the large tilsit moulds from Switzerland, and then of course the masses and masses of washing up and cleaning began (David reckons cheese making is 90% washing up, and I am inclined to agree with him). We turned the cheeses a few times throughout the early afternoon, then left them in peace (it was at this point that David also generously shared his small lunch with me, as I hadn’t bought any provisions of my own). 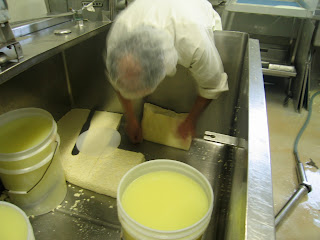 Then back to the house for an impromptu tasting of David’s cheese and some discussion around how he should approach wholesalers/retailers considering he has absolutely no marketing experience what-so-ever. Due to his cheese-making hiatus, we only had some ‘reject cheeses’ to taste – David wasn’t particularly proud of them, but I still think they would have taken out a medal at the Royal Sydney. The 'reject' Brinawa was a bit oversalted, but still hints of rich cream and grassy pastures shone through. The Bulga was AMAZING – a true mountain cheese, and I personally thought it was a damn side better than most of the imported Swiss Gruyeres I have tasted lately. Both had obviously been very well cared for during maturation - regularly rubbed with brine and turned, creating a lovely rind.

Following some reflection of the difficulties of cheese wholesaling when you are a lone farmer, we headed out to the pastures to set up a temporary fenced area for the cows that night, David charging up and down hills with me puffing along behind him in Wellies and trying to carry the fencing poles. As we walked David explained some of the pastures to me and we munched each one – chicory, clover and rye grass – they were all pretty tasty. The pastures reminded me of the super-lush ones I saw in France, it really is ‘cow heaven’ (David’s term for the rich organic and bio-dynamic pastures he carefully cultivates). Words can’t describe how beautiful the pastures were, and I was kicking myself I didn’t bring my camera. Anyways, fencing duties completed it was time to check on the afternoon milking (undertaken by David’s son and another worker), a quick inspection of the recently repaired bridge, and then back to the house for dinner – a big thanks to Heidi for cooking a delicious pasta even though she was seriously under the weather.


About 7:30 pm we headed back to the cheesery to turn the cheeses again and put them to bed for the night safely tucked up in their moulds. We returned to the house, and I collapsed into bed, exhausted.

The next morning David was up early grinding grain for the milking, then at about 5:30 we were both off to the milking shed in the pouring rain, me in my old clothes seeing as I ‘was probably going to get shit all over me’ as David so eloquently put it. Lucky, thanks to David’s watchful gaze, I managed to avoid most of the shit (but not all) as I struggled attaching and detaching the milking cups from the cows. As I fumbled about I think the cows realised I was a novice and started to kick and sway around a bit – not an easy job! David was very patient with me and even managed to capture me 'in action'  with my camera.


These have got to be some of the most contented cows around, and David just loves them – calling each by their name and telling me about each one. For farmhouse cheese-makers, this connection to the land and their animals is central to their being. The thought of making cheese with milk from animals they didn’t know, or didn’t personally care for is pretty much out of the question.  Basically, healthy land = healthy animals = top quality milk = excellent cheeses / yoghurts – and they are aware of every stage in the cycle. For me, this is the case study for raw milk cheese – single heard, organic, farmhouse cheese. (NB: Other examples of organic farmhouse cheeseries include Holy Goat and Grandvewe).

After the milking we chatted about the farming industry in general and David expressed his concern about the demise of small, local farms and the limited number of farmhouse cheese-makers in general. It is getting harder and harder for small farmers to survive – most of them keep going simply because they love it. And as David pointed out, it is really expensive for new/younger people to set up a small dairy farm, plus with an exhausting schedule of 365 days a year, where’s the incentive?

He is also very concerned about ‘who will feed his grandkids’ – which is a sentiment I think we can all identify with as we see an increasing number of imported foods, grocery monopolisation and declining ‘small farms’.

Pondering this, we drove the tractor back to the house for brekky – again prepared by Heidi despite her flu. Plus some more chats about the retail cheese scene in Sydney and the current review of raw milk cheese being undertaken by FSANZ – the craziness of not letting small farmhouse cheeseries have the choice to make raw milk cheese with the milk from their own animals seeming all the more illogical after I had observed the care taken with the morning milking.

I had to head off around midday, so that meant I could still spend a bit of time in the cheesery in the morning. We unmoulded the Brinawas and brined then. David also brushed the little smeared-ripened ‘experiments’ and gave me some samples. And of course more cleaning. 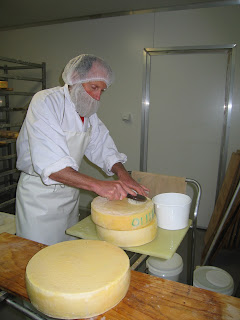 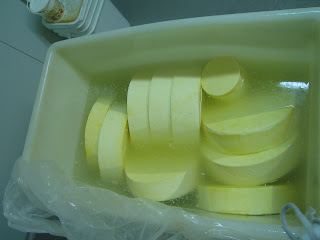 Loaded up with cheese and yogurt, I headed back down the mountain and back onto Sydney, reflecting on my time there. For me – it was back to the shop, for David – the same daily cycle 7 days a week, 52 weeks a year.

The new baches of Brinawa will be available early next year – David said he will let me know when. Hopefully we will be able to get some into Formaggi Ocello and spread the word – I will keep you posted.

Everytime I visit a cheese-maker like David I am reminded of 3 things:

1. This is bloody hard work!
2. Despite this – the cheese-makers are generally a happy bunch, smiling their way though the relentless daily farm duties, cheese making and cleaning
3. All the cheese makers I have ever visited have been so generous with their time and so patient with me – I can’t believe they just let me jump straight in to the cheese making process.

CONCLUSION: We all need to support Aussie cheese-makers, and particularly farmhouse cheese-makers all year round – not just when the mood takes us! There are a lot of Aussie cheeseries now making bloody good cheese – so no excuses for not buying it. Yes - I acknowledge that there are still some average cheeses out there...but do what you can to support the good ones.

For more pics, visit my Manning Valley picasa album. Unfortunately – during cheese-making and milking it is really difficult to stop and take a photo, but I did manage to snap off a few more. Also even though this blog is long, there are so many details I didn’t include – I just hope I did justice to Marrook Farm’s amazing set-up and products.

Alison Brien
Sydney, NSW, Australia
Cheese-lover and fromager. I escaped corporate life a few years to follow my passion - cheese. Since then I have worked in some of Sydney's best cheese rooms and trained extensively here and overseas.